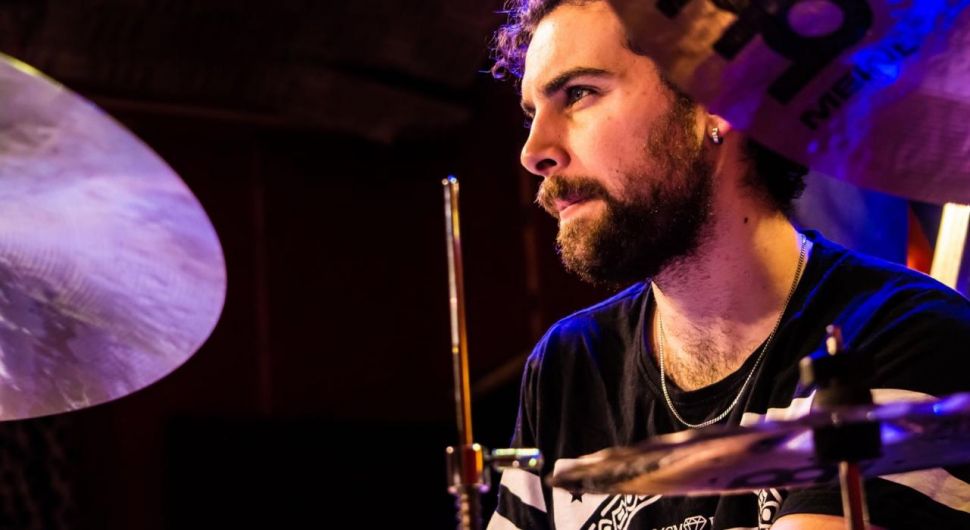 We’re right now in the time interval between the drums clinic Miguel Lamas has just presented and the concert he’ll be giving in a few minutes.

It looks good, nice people and nice place to have the concert now.

Likewise, the pleasure is mine, and I’m really grateful that you can dedicate a few minutes to this small interview. You just dictated a drums Clinic and are also in the middle of a tour, how is that like? How’s it going?

Well, actually everything’s going really good. Well, today we have Cordoba, we’re doing a tour across Spain and we’re really enjoying it. I hope it all continues that way, we’re having a great reception, good audience, full house every time, I’m very happy.

Then I have… the next gig… Right now I don’t remember where it is! But anyway, this week I have recording sessions. Bottom line, my routine always is, recording and rehearsals during the week and then concerts around Spain and all of Europe on the weekends.

And how was your day today?

It was really good, a lot of people at the Clinic, it was very good, very interactive, and now we got a show to play!

Miguel, do you already know the concept of Faster Hands, the new App that will be launched to the market soon? What’s your opinion as an artist?

I like that app, it helps you work on a daily basis, in a simpler way, using a metronome and simple exercises to develop your technique, speed, your definition, I believe it’s a great method.

Let´s talk about your technique, your development, you showed us some things in your Clinic, right now. What do you do to train your technique?

I think it’s fundamental to develop the best technique possible to then be able to express what you want by playing, music is a language, you must try to find your own way to play music. I work with simple strokes a lot and I also like to weave bass drums into it. In the end, my style routine is based on improving simple beats around the drum kit, studying Chops, combinations, bass drums weaving and developing double beats. For me, the most relevant stuff is the simple stuff, Paradiddle, Padiddle Diddle, and the thing that I was mainly studying was improvisation.

When you seat at home, practicing, are you consciously aware if you’re playing with your wrist or your fingers?

Actually I’m always using my fingers. I’ve developed my technique in a way that is based on the pincer grasp, with the index and thumb, and then the rest of the work is done by my fingers, I barely move my wrist. That way I also use less energy and have way more stamina.

Your single strokes are so fast and powerful! You use the fingers a lot on the Toms also, right?

Yes, I use my fingers all the time, on the Toms also, it doesn´t matter which part of the Kit I´m playing on. You have to work every surface, obviously the snare drum offers the least resistance, because there’s more tension than in a Floor Tom, for example, where you don’t get that much rebound. I like to work different surfaces and to achieve that there’s no distinction between elements, that al the power sounds the same in every part of the kit

In the Clinic I´ve seen that you have a special beat that you like a lot, I think. It´s like four strokes with the left ending with an accent. It´s not like a cheated Buzz roll, right?

Miguel, you studied in the United States with Chris Coleman, how was it?

It was an important and very good experience, really good. It was in the Drummer´s Collective in New York.

Tell us about the influence Vinnie Colaiuta has on you.

For me, Vinnie Colaiuta is the best drummer in the world. My Kit is the same as the one Billy Colaiuta has. The China on the left side.

And the Toms also, right?

Yes, here today I have three of them, but I usually use four.

You´ve said in the Clinic that you also had a nice encounter with Dennis Chambers two years ago at the Tamtam Drum Fest, in Seville. How was it to meet Dennis?

It was really amazing because he is, for me, another important influence, it was like a dream to be next to him. We were talking and listening to music for about three hours, it was amazing.

Miguel, any new plans for the future? Any new project?

I’m already thinking on my second album and also working on new videos, new Clinics also, classes, booking venues in Europe and all around Spain. Working hard with all these matters. I’m always thinking of new ideas, I’m very restless.

Last year you launched CD Melted Lives, your first record, it’s a must listen, a wonderful record! I love it!

I hope we meet again in the future, Miguel, enjoy playing your concert, I’ve been hearing the sound check and a bit of what you’ll be playing… it sounds terrific!

Thank you so much, Miguel. See you soon.